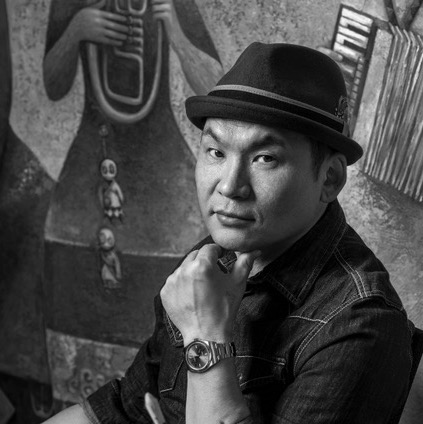 After working internationally, exhibiting works in numerous countries, and living as a global nomad for over a decade, I have recently settled back in Ulaanbaatar, the bourgeoning capital city of the newly democratizing Mongolia. Decades ago, here, in Ulaanbaatar, I obtained formal training in the traditional Mongolian painterly style called the ?Mongol Zurag,? which takes its roots and inspiration from Buddhist iconographic paintings, with an emphasis on finely detailed lines, traditional motifs, and subjects derived from history and nomadic cultures of central Asia. To begin with, Buddhism played a major role in how I discovered my passion for art. When I was growing up as a teenager during the 1980s, the communist regime repressed any means of artistic expression that did not serve as a tool of authoritarian propaganda. This meant that ?Mongol Zurag? was officially banned along with the freedom of thought and all religious practices. Yet, although officially banned, Buddhism was still widely practiced, and it was not difficult to find religious texts that contained paintings and illustrations of deities, monsters, the underworld. These ?religious? images gave me my earliest inspiration for creativity and hence influenced me profoundly. The pleasure I took in meticulously copying banned images from heterodox texts taught me that an artist should be courageous enough to seek freedom of expression. Hence, I have always imagined myself to be a firebrand, someone who aspires to seek and illustrate truth and beauty. Despite the early influence of Mongol Zurag, today, I do not identify myself primarily as a Mongol Zurag artist. I now work with various techniques and incorporate numerous artistic traditions as disparate as traditional Japanese art, modern tattoo art, and even fashion design. Over the years, I have taken up oil paint as well as watercolors. In recent years, I have also been experimenting with abstract content that reflects the troubles of living in modern capitalist society. These experimentations and the evolution of my works reflect the constant search I undertake for my own identity as well as the search for Mongolian collective identity in times of profound uncertainty and change following the end of communist era. Through my works, I aim to illustrate where we came from, what we have lost, what we have gained, and the contradictions and the dualities we face in the age of technology and mass consumerism. One of the recurring images in my early works are of women dressed in traditional garments from different periods, with eccentric coiffures and headdresses of various Mongolian ethnic groups. These women are reimagined and historicized figures, done in a decided color palette and with an homage to the biggest names in the history of Western art. My interest in the artists of the Western tradition were spurred following Mongolia?s transition into a democracy. The adoption of western influenced elements came from a genuine interest in art and visual language that was inaccessible during the socialist era. Works such as Steppe Riders (2008) or Friends (2009) merged my heightened sense of pride in Mongolian history, which was heavily censored and filtered before, and foreign visual culture, both of which seemed exotic to me at the time. Despite the Western influence, however, the heroines of the visual stories I tried to tell were all Mongolia's nomadic women. Their close relations with nature, their hard life out on the harsh Mongolian steppe, their unique inner-world, and the customs and traditions they carried on gave me a tremendous inspiration and subject matter for most of my early works. Through the distinctive features of these Mongolian women's expressions, I tried to tell a secret story that has never being told, of happiness and misery, of humanity's relations with nature, and of history and contemporary lives and how they connect with us. This period of pure inspiration, pride in our collective history, and an almost direct historic translation was succeeded by inner-direction, and my later works reflected on the stories of the self and others. In Voodoo Family (2013), for instance, I offered a commentary on the socialist era civilian informant culture, through the button-eyed doll family plagued with generations of mistrust, greed, and tattletales. Such a reinterpretation of the past became possible only following the end of the over 70 yearlong socialist system when artists, for the first time, are given the freedom to offer their truth and retrospection on the society they lived through. By contrast, The Modern Conqueror (2013) is my critique of the contemporary Mongolian society?s obsession with its past glory. In this work, I dressed the famous Chinggis Khan in a humble, button-up shirt, green blazer and gave him a soviet era medal honoring his achievements. The medal symbolizes the hollowness of the achievement oriented modern social life. Irony, satirical language as well as use of found objects is becoming more common in my later work. This latest reinvention coincides with my move back to Mongolia after twelve years of living in abroad. As one starts to see the society from the inside rather than the romanticized version from the outside, scorn and admiration, praise and critique are fused together on my canvases. In Buddha (2019), I covered the silhouette of the Buddha entirely in literal medals, which are actual badges that were once given out to heroes, workers, young pioneers, mothers, and every possible reason to honor human beings. The work is meant to reflect the dualities of price and worth, worship and superstition, glory and neglect. It also is meant to capture the sense of loss we collectively feel when a whole society unequivocally and unexpectedly transitions to a new and uncertain future.